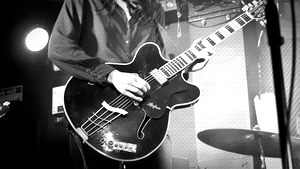 The Hofner Verithin was launched in 1960 and featured an ultra slim body, “toaster” pickups, and four controls. It was hollow, and half an inch thinner than the Gibson ES-335 of the time, and is highly sought after today. Later models had slightly different body shapes, styling and pickups. New models - called Hofner Verythin - are available featuring Hofner Humbucker pickups, and a centre block in the body to produce more sustain, deeper tones and less feedback. Alison Mosshart from The Kills uses an original Verithin, as does Kitty from Saint Agnes.