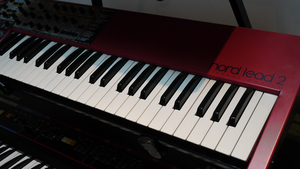 The Nord Lead synthesizer is taken a few steps further with the Nord Lead 2. It uses the same synthesis technology as the Nord Lead, but new features include a ring modulator, OSC 1 can sync with the white noise generator, increased LFO and arpeggiator waveforms and patterns, distortion in the squelchier punchier filter section and 4 individual outputs. It features MIDI control and analog-like sound and design and for those who do not need the 49 note velocity + aftertouch sensitive keyboard, there is a rack module version - the Nord Lead 2R. The Nord Lead 2 is used by artists including Fatboy Slim, Nine Inch Nails, The Prodigy, Leftfield, Mike Oldfield, Front Line Assembly, KMFDM, Mirwais, Underworld, Jean Michel Jarre, Skinny Puppy, Depeche Mode, and A Guy Called Gerald.