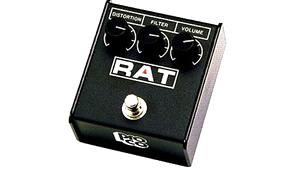 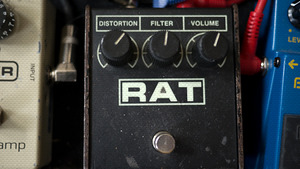 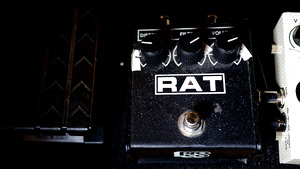 A classic distortion pedal in the Pro Co RAT family, the RAT is a versatile distortion effect. It can give you anything from gentle breakup to searing lead tones. Whilst the RAT design has varied over the years, the basic tone has remained since the late seventies. Having been used by some of the most influential guitarists in the world, its notoriety remains to this day. The three knobs allow control over your sound, and its volume and distortion. The legendary RAT Filter control rolls off brittle high-end frequencies for a creamy tone, or if turned down allows the guitar to really cut through the mix. True bypass switching makes sure that there is no coloration of your sound when the pedal is off. The RAT2 was introduced in 1988 and includes an on/off LED. Some bass guitarists use it on bass.