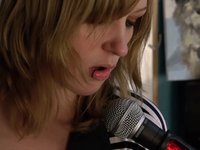 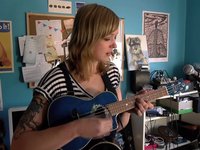 Whether she’s dressed as a unicorn in a video, or skipping through the audience with a megaphone, She Makes War’s Laura Kidd is always full of surprises. Her grunge-influenced “gloom pop” is edgy rather than truly gloomy and she has a new beautifully crafted and haunting album, Little Battles. Laura has taken part in a “Crypt Covers” session and recorded a spine-tingling version of Madonna’s “Dress You Up”.

Why She Makes War? Because ‘love is a battlefield’ says Laura, who can play many different instruments.

Little Battles is Laura’s second album, and she’s been getting more epic and weird she says. She does a lot of her music production herself, and has loved experimenting, even on her first album.

I’m really interested in using strange production techniques, just things I would think up and go, let’s do this. So Myles Clark, my co-producer’s very amenable to that sort of thing, luckily. So on the first album there’s a song called Got Milk where I recorded the vocals onto a Dictaphone, like a proper old school Dictaphone, with a tape and everything.

That was what I recorded all my initial song ideas on. And so I thought it would be nice to bring it into the studio for the finished thing. It also gives a really weird distorted vocal sound that you really can’t get from just a plug-in.

On the new album I play bass, guitar, autoharp, recorders, melodica, saxophone. There’s definitely megaphone on there, I always call that an instrument as well because it’s something you have to hold, the megaphone.

With all that choice, what is her favourite instrument, especially for live?

I love the autoharp but it’s really impractical because it’s really heavy. So the most practical thing I think I have is my ukulele.

I knew that George Harrison used to play one, that was my draw really because George is amazing, and then I found out about people like Amanda Palmer and various other people who use ukuleles and thought oh, that’s really cool, that people are doing it in a different way.

I thought basically I can’t play it like a Hawaiian thing so what am I going to do and I just started messing around and making up chords and then I wrote Scared To Capsize which is the first song on my first album and then I’ve integrated it into the set quite a bit because people always like it when you bring out a ukulele. And I have a particularly beautiful one now so it’s quite exciting.

Laura plays a Luna Dolphin ukelele which has an onboard preamp, and forms the basis of some amazing live looping.

I realised that I wanted to start doing vocal layering in some way and I didn’t really want to have a laptop on stage. I liked the idea of everything being created in the moment so people can see it and feel part of this unique experience, this unique version of the song.

I was quite inspired by a couple of friends of mine who do this very intricate looping. Steve Lawson and Lobelia Lawson

With the ukulele it just worked out really well. Basically you set out the amount of bars and beats you want with the ukulele first and then when you start looping vocals you don’t have to stop and then start again.

She gave us an exclusive performance of her song Shields and Daggers, in her home studio.

Laura uses a Boss RC-20XL for her looping and we asked her to show us around the kit.

She talked us through the looping process on her vocals and ukelele.

The main guitar she used for the videos is made by Faith, and it’s opened a lot of doors for her.

I’m very excited about my acoustic guitar, it’s a Faith Venus. I’ve been trying to find a guitar that sounds good, that I can make sound good, for a long time. I spent a few years thinking I just can’t play acoustic guitar because my hand would cramp up and I just wouldn’t be able to make the top notes ring out very well and I couldn’t figure out why, and it must just be me.

Now I have a guitar that I can play and that sounds nice and that’s really exciting. It also has some really cool electronics where you can pan the sound. And it’s also got this thing, I’m not sure I’d use much but it’s pretty great, where you can make some of the strings sound louder than the other ones when it’s plugged in, which is nice because you can make it sound more bass heavy or more treble heavy. There’s a lot to explore in this guitar.

Laura is always trying out new sounds, and does things like patch together mobile phone recordings from touring around the world.

I’ve been on tour with different people and always have something to record audio. I was using the Zoom H4N in New York, just walking around the streets and recording people on the subway and stuff, and so we made a collage of all of those things.

There’s still a big emphasis on everything being very shiny and perfect-sounding. And I’m not into that at all. I’m into personality, trying to get personality onto the recordings in a variety of ways.

That desire to experiment recently meant she got together with Hope and Social for a Crypt Covers session, recorded in a day. It produced an achingly beautiful version of Madonna’s “Dress You Up”.

Laura makes her own music as She Makes War but also plays bass for other people. She has done several tours with Tricky.

I was on tour with Tricky in South America for two weeks, which was amazing. I’d never been to most of the countries we went to. And I’m one of those people who will get up at 6 o’clock in the morning and go walking around the city taking photographs and recording bits of audio before the early lobby call to go to the next gig.

That followed on from four months in 2008 when I played with him before. I got to travel to some really amazing countries and it’s the best international tour I’ve ever done. Playing with someone like that is interesting because you get to study close up how someone creates their particular atmosphere and gets their particular personality across through their music.

I just love the way he does that, like layers and layers of different kind of parts. It’s about really creating this kind of hypnotic mood. Also he conducts the band at certain points so nothing’s ever the same twice, and there’s some songs that go on for ten minutes, the crowds really love it. He’s a bit like a DJ in some ways, the way he can bring people up to this point of tension and then give them this big release.

Laura is a talented film-maker and loves creating her own She Makes War videos.

I can do whatever I want. I can get someone to make me a paper boat, or I can dress as a unicorn, or I can get zombie clowns walking through Finsbury Park.

She is inspired by some unique musicians.

I listen to a lot of grungey music and a lot of kind of heavier rock music but also a lot of sensitive, light stuff. Lots of female vocals, lots of female musicians. I’d say that I’m quite influenced by lots of people like Carina Round, Kristin Hersh, all of those great ladies, but I certainly wasn’t trying to sound like them so I just played what came naturally.

She showed promise when she was tiny and it was spotted at school.

I was lucky enough to have a really wonderful infant school teacher called Mrs Banks and she is who the first album is dedicated to. I think that she just gave me all these tools, these wonderful tools. She taught me to read music when I was about three or four. It was ridiculous, I must have been ridiculously precocious. I learned how to read music then. I learned the recorder with her so that’s another little thank you to her, well maybe it’s no thanks to anybody else, having a recorder, well a three-part recorder instrumental on the latest album. But I like it.

Then when I moved to my next school I started playing violin when I was about seven. And then I played saxophone at school as well and then I started getting into kind of rock instruments when I was in my teens.

I’ve just got an OCD Overdrive pedal, which is really beautiful.

I’ve just started using this really beautiful microphone called the Copperphone, which is really beautiful. It’s handmade, and it has this kind of vintage sound to it which is really interesting, I love it. It’s just a really nice, really unique tone, and I prefer that I get it through a microphone rather than a pedal, personally. The only thing is that it feeds back if you have it through your monitor, so it’s a whole conversation with the sound man before the gig but it’s worth it. It’s a really nice contrast for certain parts of vocals.

Placid Audio - The Copperphone Hand-made characterful mic for recording and live performance, used by artists such as The White Stripes and Laura Gibson. Read More

Social media plays a big part in Laura’s life especially as she is an independent artist. She joined Twitter before she had released any music, and it’s helped with things like her Pledge campaign.