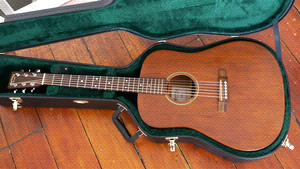 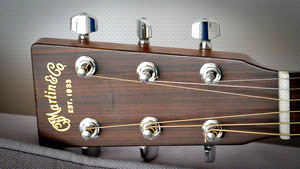 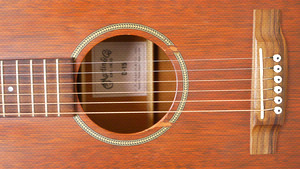 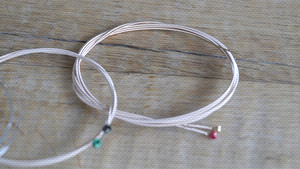 Avert Francis writes beautiful songs that have been described as ‘gossamer delicate’. He is part of the vibrant UK folk scene and his finger-picking style is in the vein of Townes Van Zandt, Bert Jansch and Nick Drake. He has recently released his first album, Is He Sleepwalker, and has been playing jazz, blues and folk festivals such as Cheltenham and Lakefest, as well as legendary venues like Ronnie Scott’s.

We asked how the folk scene has been changing, especially in his London base, and about his music.

It’s enjoying a huge revival at the moment, there’s plenty of places to play, loads of little folk collectives, even on TV adverts, things like that, you can hear the acoustic guitar plucking away in the background, so I think it’s being used a lot more, to get people’s attention.

Avert played us a brand new, and poignant love song - Little Caves. We were mesmerised.

I remember when I first started playing the guitar and doing a few folk gigs there was a bit of a scene going on with people like Kid Harpoon and Jack Penate and various other acts who were doing really well. Mumford and Sons is one that really comes to mind and there’s plenty of others that are bringing up the rear there.

There’s also a practical reason why people are getting into folk.

I just think it’s easier as well for people to pick up an acoustic guitar and sit at home and knock out a few melodies rather than having to invest in all of the amps and the equipment for getting a full band set up together. So I think it’s just a little bit more accessible for beginners and it’s getting a lot more exposure these days as well. But it’s never really gone away to be honest.

We asked Avert to describe his style of folk.

I think my style of folk music would be more along the lines of what I would call modern American folk music, heavily influenced by people like Townes Van Zandt, you know, Steve Earle, Guy Clark, that sort of thing, but also there’s a big British influence there as well. Bert Jansch and Nick Drake are big influences for me.

Personally I would say my style is defined by a finger-picking approach to playing the guitar and also a storytelling element in the lyrics. For me personally, that’s what I really fell in love with - the fingerpicking, the storytelling of people like Townes Van Zandt and Bert Jansch.

I guess it’s an American style of clawhammer playing. It’s what I’ve always enjoyed, that differentiation between each single note being played rather than a strum, it just was more interesting to me, lots of different melodies going on with the guitar as well as the voice, just with one person.

I learned how to pick the guitar and developed my own style and my own sound, but then it’s also important to chuck a fast one in there or a bluesy one in there as well, you know, to keep the audience interested.

When it comes to song-writing he tries to balance personal and universal experiences.

I think that a lot of it is very personal but I don’t like to make it so direct. I mean some of the songs are, but I think a lot of it you could almost perceive it to be about anything. I think that’s a real quality that songwriters should have, and I think I heard somebody else say this, that you know, it’s always important to not tell somebody what your song’s about, let them decide for themselves if they want it to be about something that it’s not, that’s fine. You know, because they’re enjoying it and they’re creating their own scenario.

So how did he learn his craft?

When you’re 8 or 9 years old, you know. But then I stuck at it until I was, I guess, on and off for probably nearly 10 years, playing piano and doing various different grades, and then I went off to college and couldn’t take a piano with me logistically to college and I didn’t want a keyboard so I had a guitar, I got a guitar for my 18th birthday and then took it to college and kind of learnt a few little songs there and it was really when I came back from college, so I started quite late really on the guitar, sort of late teens early 20s,really getting into the guitar and then for the next sort of eight or nine years, just been solidly playing it really. Yeah, started off on piano then drifted into guitar because it’s just easy to carry around, I guess.

Avert has a very special Martin D-15 acoustic guitar, and talked us through the key things he needs to play.

I’ve had this particular guitar for about six years now, and ever since I started getting into music and really learning about guitars, a Martin was the guitar that I always wanted to have. I’d always hear people talking about them in reverence and saying that they were the best guitars if you were a fingerpicker and a folk musician.

You can go into the vintage guitar shop on Denmark St and see old Martins there from America from I guess the 40s or whatever, even before then, you know, these beautiful old mahogany guitars. So I’d see a lot of players using a very similar mahogany guitar who were fingerpickers, you know, from the 50s and 60s and even beyond like old blues players.

I read quite a few reviews on this particular guitar and it all said it was very trebly so it was perfect for fingerpicking and I’ve been really really happy with it.

It’s a solid mahogany guitar, so the front, the sides and the back are all very thin mahogany wood, which gives you a very trebly sound, and it’s American-made, made in Pennsylvania and it’s been absolutely brilliant.

I had a few little knocks and scrapes on it, a few little cracks that I had to get repaired through, you know, just continuous gigging, it’s the only gigging guitar that I have, but yeah, for my particular style of playing it’s absolutely perfect.

It’s quite loud as well because the wood’s very thin, and I love the way it looks. I like having a darker wood guitar. Darker wood’s becoming very common now actually, but certainly when I started playing, you know, eight or nine years ago or even before that, the guitars that you’d see people playing tended to be, you know, the sort of blonder wood, that they played with a scratchguard,

I really want the traditional-looking instrument. So you know, you see a lot of spruce guitars and that sort of thing, and laminate-body guitars, but you know, solid mahogany is just perfect for fingerpicking, so that’s why I chose this particular guitar.

Avert travels light, but there is one other key thing he needs.

When I’m playing live, normally I will always use this guitar, and I also have a pickup so this is something that you get fitted to the guitar in order to plug it into a PA or a sound system so that you can amplify the guitar and this just sits underneath the strings.

It’s very good, for a very good balance on the strings there. Depending on where you play, if you’re playing in an environment with lots of interference, like lots of fluorescent lights and stuff, you can get a little bit of a buzz but that’s only if the sound system in the venue isn’t that great. All in all it’s a very good pickup.

The other really really important tool is a capo, I’m sure you’ve all seen one of these. This goes onto the fretboard here on the guitar just to bring up the intonation of the guitar to suit your voice on a particular song or if you want a song to sound a bit higher or in a different key. Very essential, most of my songs are all, you know, the third or the fourth fret, So that’s essential, can’t leave home without that, if you lose that, you’ve had it. And then obviously spare strings as well. Every guitarist should carry around a spare set of strings.

Avert is very particular about his strings.

I will always use D’Addario, just through years of playing, trying out different strings, I’ve never broken one of these strings. I’ve broken one tuning up the guitar but that was on a very cold day when my central heating wasn’t on. But playing live they’re very reliable, phosphor bronze, they’re very bright, again goes perfectly with the fingerpicking, you get a very trebly sound from those.

Those on this guitar gives you a very very good sound for fingerpicking, because I don’t use any finger picks. A lot of pickers will actually use sort of fake nails, plastic or metal nails, which gives the effect of a pick. I just use my thumb, you do get a very bassy sound so it’s important to have everything in your favour to get a bit more treble on the guitar.