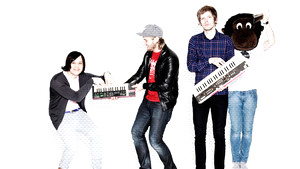 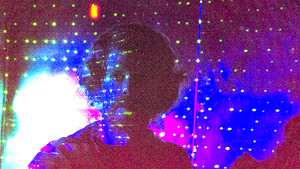 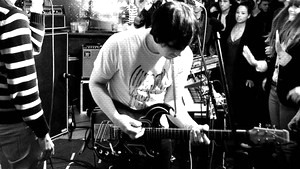 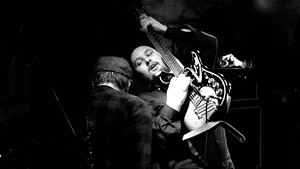 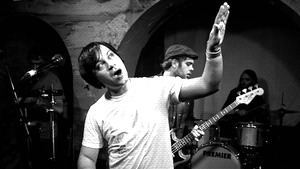 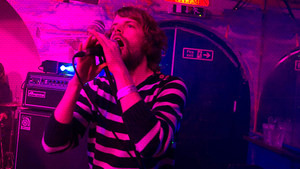 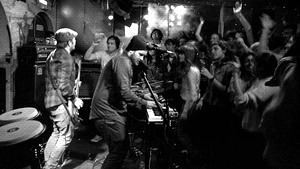 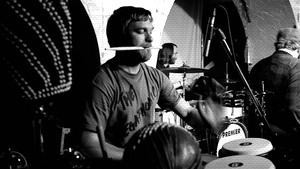 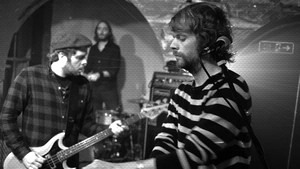 An infectious electro-pop band with amazing live shows, Casiokids pair old analog keyboards with Afrobeat techno and dub influences. They have been nominated for the equivalent of a Grammy in their home country of Norway for their album Aabenbaringen over Aaskammen. There are four members, and they go up to six for gigs, playing with two drummers. Det Haster is one of their most well-known tracks - even available as a ring tone - and their new single Dresinen has launched with an animated video. Casiokids are: Ketil Kinden Endresen, Fredrik Øgreid Vogsborg, Omar Johnsen and Kjetil Bjøreid Aabø. They are not your standard band, as they work in theatre and dance as well as music, and they told us all about their experimental side.

From rigging mics up to playgrounds, to using playful synths, Casiokids love to experiment and have fun - that even includes choosing their band name!

The Olympics are a bit of a theme in their music - whether that’s a look ahead to the 2012 Olympics at one of their London gigs, to working on their own version of an opening ceremony.

We’ve had numerous visual projects ranging from workshops and sound installations to dance and theatre performance or shadow puppetry. One of the latest things we did was in a kindergarten in Bergen where we made the opening ceremony for the (Winter) Olympics in Vancouver in 2010. Together with the children in the kindergarten we created an Olympic song or an Olympic anthem for the ceremony. We also worked together with Digital Theater doing different animations and puppetry for the opening ceremony.

Their latest video is an animation for the single Dresinen, made by Rumpus Animation.

Ever since the beginning we’ve been experimenting with using the pop songs and elements of the sounds that we make in the studio in a different visual setting, not necessarily always being a concert or a club. We’ve had numerous workshops in 2007 and 2008 in Paris and in Bergen. We did kind of a sound installation and a workshop at the Sous La Plage festival in Paris where we rigged up our sound equipment in a playground and used the different apparatuses in the playground as instruments you could say, with children playing on the apparatuses and without knowing it joining in on the music that we made being situated with our equipment in the playground so kind of like a workshop to create the sound and the music. And we’ve collected a lot of the pictures and the info and the videos and the audio that we have done in the past at casiokids.com/performance.

Well when we did the festival in Paris we used a lot of toys so for a bass drum effect we had a trampoline and the kids would jump there and we had a microphone underneath so we’d get the boom, boom. And then we had this pole with a tennis ball on a line and there would be two kids knocking the ball around and that would be the snare drum.

They even wired up a see-saw for sound, with a microphone on each end!

It’s really interesting to do those things because you never know the structure of the sound and what it’s going to sound like and, sampling that live and experimenting, it’s a really fun thing to do.

I think we’ve brought with us a lot of that mentality into the studio when we’re making songs that we’re releasing. Often we record what we’re doing - like for instance in Paris when we had this 3 hour long session playing with those kids, we can bring up elements from those recordings and use that in the studio and like develop parts of songs so really everything’s connected.

It’s always been about playfulness with our band, and exploring different possibilities.

Their name Casiokids gives a pretty big clue as to the kind of gear they like, so we wanted to hear more.

We started making music with Casiokids on Casio keyboards so Ketil came up with the name and it was basically the stupidest name he could think of, and it stuck. It suits the music in a nice way and it’s easy to remember.

Casio for us is about the nostalgia, I mean when we travel around playing it seems like a lot of people around our age who were young in the 80s at least have this relationship to the Casio, that it’s usually one of the first instruments that you had, and it was also my first instrument. So for me it’s also about the nostalgia part of it. And it’s really nice to come to Japan and come to the home of the Casio this time around, and it’s always been the starting point of our music, the Casio is the only instrument I can play all the instruments.

We started out with the first Casio and then expanded from there. We still use several of those small 70s and 80s Casio keyboards.

They’re always seduced by exciting gear that they find on their travels.

Their favourites include the Casio SA-21, and a Casiotone MT 100.

They’re using a Burns London Guitar (Dream Noiseless), a Hagstrom Bass, and a host of Meinl Percussion such as Congas. As well as a Roland SP-404 SX drum machine.

They have got room in their lives for non Casio synths too though.

We also have grown very fond of this old 70s Korg synthesiser that we use a lot. (Korg Micro-preset + Micro Korg) So that’s kind of as important as the Casio nowadays. But yes we’re suckers for old vintage sounds. It’s not the same with the brand new digitalised synthesisers, there’s something missing.

Their first album in 2006 was provocatively titled “Fuck Midi” and they have stickers of the album name on their current kit.

It’s just a mentality we had at least to begin with, I guess, it’s not a definite thing that we’re not going to use new technology and stuff but we kind of like the old fashioned way of doing stuff and the organic way of doing it, like playing stuff instead of having it gridded on a computer.

So what does Casio make of the band? Are they being sponsored?

For a long time we thought that at some point we were going to run into Casio and they were going to either endorse us, or they will sue us, and we were thinking that’s good publicity either way. But actually last year you could say we did our first collaboration with Casio, we were invited to play at this Casio watch brand showcase in Mexico City, The G Shock tour. So that was a nice experience, our first venture into the Casio brand. So hopefully we’ll get some merchandise. Maybe our very own Casiokids synthesizer!

We got a gift in Japan, from a fan. She gave us an old 80s keyboard, a Casio, it had speakers, not attached, but in a case, it was really nice and looked as if it hadn’t been used since the 80s.

Their main collection is in Norway though where they have had help from pop legends a-ha in the form of prize money which enabled them to build a studio and tour.

We have a pretty extensive instrument park with a lot of different synthesisers back home. We have our own studio in Bergen, we’re actually building a new one now together with another Bergen band called Young Dreams, so that’s beginning to take shape. And I’m looking forward to mounting all the synths in there and have a synthesiser forest.

But sometimes there are limits to technology – and it’s helped shape their distinctive sound.

From the beginning it’s been about the immediacy of the sound. When we started out recording on the computer, the programme we used was not the full version, there was something wrong with it. So whenever we started out making a song we had to finish it the same evening. You couldn’t save the first one and come back to it, you had to finish it completely during that first session and I think that kind of shaped our sound, together with the fact that we used the Casios.

They have become more confident about singing in their native tongue too.

I think that in the beginning we were an instrumental band more or less, and we eventually started including vocals, and the natural thing was to do it in Norwegian because it was personal and it’s just more natural. I think it shines through even though you can’t understand the lyrics you can feel the vibe of it.