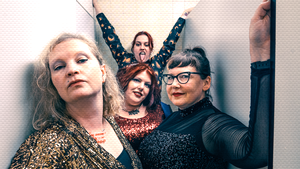 I, Doris - photo by Minni Moody 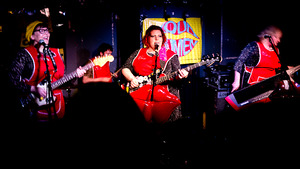 Post-punk wonderwomen I,Doris are shaking up music with their mummycore riot pop, sparkling singles and unmissable Iive shows. Their tunes feature on Radio X and BBC London and their new release is the lush ‘In The Ladies’, together with a glorious video.

New single - In The Ladies

I, Doris are back with a party-tastic slice of rebel joy ‘In The Ladies’.

Featuring a gorgeous groove, trademark ear-worm chorus and lush trombone, it’s the lead single off their mini-album that’s out on 21st November and available on pre-order at Bandcamp now.

And the feel-good, catchy punky pop anthem comes complete with a sequin-tastic video filmed in the ladies!

I,Doris say the track is inspired by those Big Nights Out that ended up taking place around the sinks in the pub bathroom.

“This song is dedicated to all the new friends we’ve made in ladies loos over the years! Often on a BNO we end up spending ages chatting to whoever’s in there, putting the world to rights in a place where we can actually hear to talk, helping a sister out with an emotional crisis, giving relationship advice … and blokes think we’re just having a wee! There’s a lot that goes on in the ladies.” – Doris

There’s an I, Doris mini tour coming up too.

‘In The Ladies’ features

Music and lyrics by Cassie Fox.

I, Doris take no prisoners, instead they “take a glittering disco punk meat cleaver to the gender challenges that no-one else is talking about,” we wrote after one of their amazing live shows. We’ve taken the I, Doris pledge more than once!

‘Wonderwomen’ is their disco-tastic 3rd single, an uplifting song that muses on the idea of women having everything, which really means doing everything.

They’ve made a cracking DIY comic book video, which sees the Dorises donning superhero costumes to tackle everyday epic battles, like the school run, the office, and the supermarket.

The video was filmed just before the lockdown – and the Dorises say if you watch the supermarket scene carefully, you can see the last toilet roll in Tesco being grabbed!

On-stage, the band are all called Doris, as emblazoned in diamantés on their trademark tabards. Off-stage, they’re Cassie Fox (founder of the LOUD WOMEN festival – bass and vox), Lucy Morgan (keytar and vox), Abby Werth (guitar and vox), and Louisa Edwards Knight (drums). We grabbed Cassie to talk about the song.

How did you write the song?

I wrote the words quite a while ago now - if I remember right, I wrote it while doing backstroke laps in my local pool. I seem to always write songs while I’m moving - often in the car, or cycling to work. (Back in the days when we were allowed to swim and drive and cycle and work!) Anyway, clearly that’s not what you’re asking. I had been musing on the idea of women ‘having everything’, and being hauled up onto pedestals for juggling work, kids and whatever else got thrown at them without dropping anything.

There’s so much pressure on women especially to do so many different things at once, and to carry them out to perfect, superhuman standards. I wanted to write a song about allowing yourself to be just fine. Some days there are just so many challenges that even the most mundane-seeming actions, e.g. getting the kids to school vaguely on time or not killing your boss, are major achievements.

What was your go to music gear for the track?

My bass is that lovely shortscale Squier Jaguar that everyone has (especially comfy for me as I have ridiculously short arms like a T-rex).

The most interesting instrument on this (and possibly any) song is Doris’ keytar, which is a Roland AX-Edge – all black keys with a red stripe, beautiful. Doris won’t tell you this herself, but she’s a super fancy classically-trained pianist. But nonetheless her finest musical moments might be the ‘pew pew’s she makes with the laser gun noise on this.

How did you record it and did you recruit some extra Dorises along the way?

We recorded the drums separately, as our primary drummer, Doris, works crazy shifts and parents kids and, well, as the song says, she doesn’t need to be a superhero – so she recorded some drums in a local studio when she had a spare hour. The rest of us Dorii piled into One Cat Studio in Brixton to record with the sound-genius Jonathan Clayton (from Hurtling), joined by the legendary Charley Stone (an honorary Doris) as our Producer. Jonathan mixed and mastered the track at the same time as ‘Just Some Doris’ our previous single.

We think the Dorises should run the country. What would you do if you could unleash your superpowers to create change right now?

It would be good to have someone competent running the country – not sure that’s any of us, but fuck it we couldn’t do any worse than the current shitshow eh. And what superpowers could we use … maybe some kind of mega laser beam from our eyes that simultaneously cures people of Covid-19 and fascism. Zap that shit all over the world, pew pew pew.

New single - In The Ladies