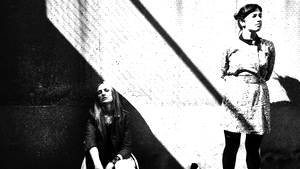 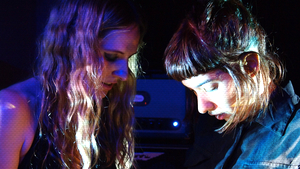 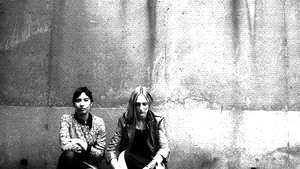 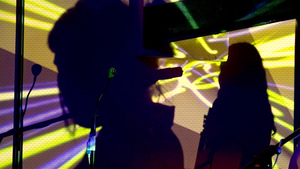 Kite Base - by Iona Dee 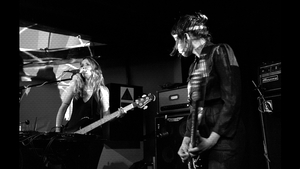 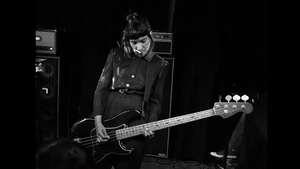 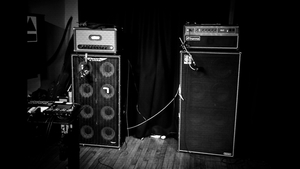 Kite Base create compelling dark electronic tunes, and they are performing at Glastonbury Festival 2017. Their acclaimed debut album ‘Latent Whispers’ fuses harmonies, synths and beats with fierce rhythmic bass lines and sonic experiments - the result is post-punk / pop with edge. The duo is made up of two bass players - Kendra Frost, and Ayse Hassan from Savages - and we talked to them about their sound.

Kite Base - ‘electronics and bass’

Kite Base say they make ‘electronic music with an industrial edge, blending the craft of pop with organic noise’. Their first release, ‘Dadum’ shows just how powerful a sound that is, with both Kendra and Ayse on vocals and bass. Seeing them live is spellbinding - their set dynamic and driving, with the edge of Joy Division, the space of The XX, and the beats and pop experimentation of artists like Grimes or FKA twigs.

Kite Base explain the meaning behind their name with reference to a main starting point in origami, ‘a Kite Base is an opening move made with simple folds to generate a firm and fertile foundation for creativity.’

We were excited to be able to find out more about their creativity and music.

How did you come to start making music together?

K: Ayse and I had known each other for a few years. We hit it off from the start in general and then it transpired that we both played bass. Big tick! Then we listed off bands we liked and found that the majority of them were synth led or electronic. Something had to happen after that!

What kind of sound are you aiming for?

K: Actually we were both really clear about what we wanted from the start and have stuck closely to those original discussions. We wanted to try and write melodic songs and explore how two basses could work alongside each other, let them take centre stage sound wise, add in electronics that were part inspired by that Sheffield school of thought and part dance orientated.

A: The main question was how to incorporate two basses without comprising the songs we wanted to write. We wanted to write music with contrasts, abrasion, melody, harmonies with a chance to experiment with the use of sound/field recording in our live show.

How do you write your songs, tell us a bit about the process?

K: By inviting a bit of alchemy into the mix! Start with a sound, a beat, a melody or lyric, then if Ayse is on the road, we beam ideas over to each other digitally. That’s where DAW’s come into play for us really - initial composition sketches rather than live use. However, after having seen Holly Herndon play recently, she has totally changed the game for me about using one live. She is my new Delia Derbyshire! Amazing.

A: Being on the road can be a great source of inspiration, I remember taking my Zoom around with me and recording interesting noises from all over the world, in the hope that we would manipulate and use those sounds as samples or as inspiration. We intend to incorporate more of these sounds during our live shows, with each field recording I can remember the location and the feeling I felt.

What kind of musical experimentation are you doing in Kite Base, for example using new or vintage synths, loops and field recordings?

K: I had a fantastic session with Phil Winter (Wrangler) and Guido Zen (Vactrol Park) the other evening. I’m a huge fan of them both. Guido makes his own synths, oh my lord! I learnt a shed load in one sitting - different approaches to making catalysts and other ways to sculpt sounds. I think it’s really vital to fuel your own practise by seeking out others who work in a similar vein, sonically or otherwise. It keeps you on your toes.

A: For me, it’s an exploration of using my voice as an instrument, I want to sing more live as well as manipulating field recordings, I’ve been researching various techniques of manipulation. It’s always good to challenge yourself with something new, to push yourself out of you comfort zone.

With two bass players in the band, how do you divide up the bass playing?

K: Like a rhythm and a lead guitar would… that’s the beauty of it for me.

A: Kendra and I have different playing styles which naturally dictates who plays what in each song.

Tell us about your recording, do you do it all in a studio or record some or all of it yourselves. Do you produce your tracks or work with a team?

K: Everything is Ayse and I up until the point of final recording. We write apart and together, using a mixture of hardware and DAW’s to produce the songs and record demos. Then we rehearse and tweak things so they work better live because things inevitably sound different once you turn everything up to 11 and kick in a plethora of pedals. By that stage, we are happy with what we’ve written and want to open up the process as to what else can be done to adorn and enhance these ideas on record. I record my own vocals the whole way through though - I’m learning a lot about my voice by producing myself there and I haven’t finished exploring that yet. Never say never though! Best to stay open!

How important is it to you to have a particular band philosophy and visual aesthetic, and how hands on have you been getting with this?

K: All related avenues are extended creative outlets so it’s nice to be able to be so hands on with them. Be that via merchandise, stage outfits, visuals… they are all important because they present opportunities to strengthen the thing overall. (That also makes a necessity out of doing things like hunting out a pair of heels to match the colour of my DR strings, you see!) We design and make things ourselves and we seek out people to collaborate with. I made our Kite Base pin badges with the help of my friend Oli’s laser cutter and our long suffering friend Leon helped us realise our design for the T-shirts that make up our logo when you stand as a duo. Craig Ward designed our beautiful artwork, Sam Dunn illustrated our first video… it’s a lot of fun and I think as long as you remember that these things are there to support or complement the sound and not the other way around, why not explore them and be as hands on as possible?

How do you describe your individual bass sound in Kite Base and is it different from how you play and sound in Savages?

There are quite a few differences, firstly I use more effects in KB there is more space for experimenting. KB songs lend themselves to a slightly different way of using my instrument, at points it’s more held back and controlled due to the nature of working with a drum machine, so there’s more precision and less ability to allow movement in things like tempo and structure… although there are things we plan to do to allow an element of experimenting live, I’m very much a fan of the tension and excitement that chaos can bring to a live environment.

How did you start playing bass?

There wasn’t one defining moment, the evolution of my upbringing naturally pushed me in that direction… At the age of 8 I started learning to play the piano, from that point I continued to have an interest in learning to play musical instruments, I preferred teaching myself and found my own way of making music I wanted to hear. I would spend a lot of time with my cousin up until the age of 12, during that time we constantly taped songs we liked off the radio - we would create mix tapes for each other. Music shows like Top of the Pops, presented me with the likes of David Bowie, Blondie, Nirvana and so on, which only fuelled my desire to play an instrument further… So around the age of 16, I asked my parents for a bass guitar and I joined a punk band!

People who follow their heart (as cheesy as that may sound!). The likes of mountaineers like Alan Hinkes who has climbed all the 14 highest peaks in the world. I’m constantly fascinated by humans and their desire to embark on such dangerous adventures for no other reason than to fulfil themselves. I am excited by the wonderful Poly Styrene, she was such an inspiring front-woman, there’s an early interview with her where she is just herself, being honest and very innocent, that interview made me cry as there’s so much hope and excitement. Artist like David Bowie who have over the years has re-invented himself, watching Bowie through the years is interesting to observe. David Attenborough whose autobiography I’m currently reading is someone who I’ld love to spend some time with. His voice has narrated many series I love, Frozen Planet, Planet Earth the Natural World, had I not made music I would have been a scientist.

Kite Base - ‘electronics and bass’
Kendra talks bass and electronics

What kind of amp and cab are you using, we think we spotted an Audio Kitchen amp, which is something very special?

K: Very special indeed! It’s an Audio Kitchen Base Chopper. (A Kite Base Chopper, as we prefer to say!) I wish it was mine - it’s Ayse’s head, but we found when we play together, it works nicer with my Stingray. Right when I thought I couldn’t love my Stingray more… I run that through an Ashdown 8x10. I don’t do light kit.

Live you are playing synth and triggering sounds, tell us a bit more about your set-up and also what you have been experimenting with.

K: We have a synth/drum machine we named Alan after Mr. Turing, a sampler connected via MIDI for triggering and an effects unit added on to that. DSI, Akai and Korg all merrily pinging 0’s and 1’s at each other like a techno reprise of Ebony and Ivory… Alan is our third band member.

K: My Mum brought me up on a diet of The Beatles, Sky and Tubular Bells so that’s probably why I love harmonies and got into synth led stuff… it’s all her fault! Anything that combines those elements inspires me sound wise, I have always loved Radiohead and cannot wait to hear their new work; Gazelle Twin, Holly Herndon and Hannah Peel all make incredible music and I admire them to the hilt for their autonomy. And I have probably already gushed enough about Mr. Reznor…