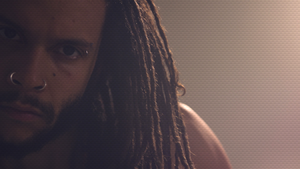 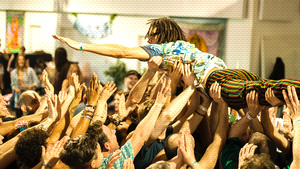 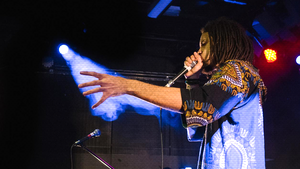 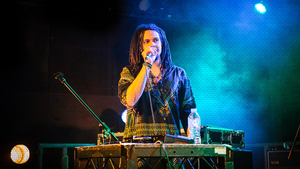 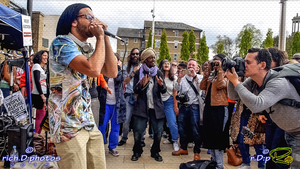 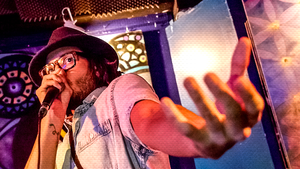 Marv Radio is a dazzling artist - rapping, singing, and beatboxing, creating unforgettable tracks and performances. The independent hip-hop star combines conscious writing with a determination to use his skills for good. Previously known as Marv-ill, he has a new EP coming out called “The Airwaves”, and has just released the video for one of the tracks - hard-hitting lyrical masterpiece Space, that we’ve got on repeat.

Marv Radio’s new track Space pins down London’s problems with incredible lyrical flows and a catchy hook. Gentrification, division, racism are all under the spotlight, but ultimately there’s a message of positivity in his ‘Space mission’.

The production is epic, and the powerful music video is a collaboration with videographer James Williams who used a double exposure style to bring the subject matter in the song to life.

I wrote Space when I was out in The Gambia, teaching, performing and connecting to my ancestral culture. The producer, Triple J of Jlive Music gave me the beat and the space I had from London had me reflecting about the things that frustrate me about my city including the overcrowded nature of the city. While channelling my anger I still wanted the track to be uplifting and not overly negative.

Your work sets out to be positive, why is that so important to you

I have been on a real journey of self discovery, from a former depressive to a teacher of meditation and a sound healer. After travelling to the Amazon Rainforest in 2014 I had an epiphany and felt that I had to use my voice to promote positivity and change the paradigm that currently exists in the music industry. I hope that one day positive music can be as popular as the bling culture within rap music. I make my music for the younger generation and I take responsibility for everything they will hear.

I’m definitely not a lone voice in positivity, I’m not the first and I won’t be the last. I just hope that positive artists can reap the same rewards as those who push the status quo. With Artists like Jay-Z and Kendrick Lamarr releasing conscious, political music I think now, more than ever there is a chance to be a successful artist while speaking honestly, consciously and from the heart.

You are known for your beatboxing skills, how easy is it to switch from that to rap, and do you sometimes mix the two

I actually started rapping before beatboxing and they have influenced each other. My rap flow is pretty rhythmic and the drums in a track influence how I rap. I also have tracks where I create beats using vocal loops, like the track “Levels” which is also on The Airwaves EP. I’ve been known to beatbox and rap at the same time.

You’ve also worked with laryngectomy patients, how did you help them to beatbox

This was an incredible project with the Institute of Education and Shout At Cancer and it was such a learning process for everyone involved. I had to deconstruct my beatboxing to work out what sounds did not involve using vocals, but they were able to learn the basic beatbox sounds and keep good rhythm. It’s 7 times harder for laryngectomees to breathe so I was amazed by what they could do. The project was picked up by BBC 3 and featured on their Amazing Humans programme.

How do you work up your tracks, especially Space

Usually the beat will speak to me and I will get a concept for the track pretty fast. I approach my lyrics like drums and often freestyle to a beat to find the flow and the tracks generally write themselves. As long as I’m aligned to my truth, I tend to be able to channel the lyrics without overthinking.

For my live setup I use a Shure KSM9 mic, an Eventide PitchFactor and an RC-505. In the studio I work with my team Abstract Sun who have some lovely gear for the recording process. We record into a Neumann TLM 103 mic and they have some amazing outboard gear. The SSL 4000 compressor gets used a lot in the mixing and mastering process.

How did you record Space

I recorded the demo in my boy Mas Law’s bedroom studio and then re-recorded all the vocals from scratch with the Abstract Sun team. The key thing was getting the vocal energy right to get a good balance of aggression/frustration but create an overall uplifting experience.

What can we expect from the full EP

The EP is extremely varied. I’ve already released a video for the first track “Balance”, and that has been what the project has been about, finding a balance between different sides of my personality. The airwaves has songs about the end of my last major relationship, getting past mental drama, spirituality, and persevering through no matter the circumstances. I constructed it to be real and inspirational with a bit of grittiness thrown in there.

I’m currently in rehearsals for a children’s theatre show called “The Magic Fish” which is touring through October and September using my beatbox and acting skills. I’m performing at a guest list only event Cabaret at The Curtain Shoreditch 9pm Saturday 16th September, headlining the acoustic stage at Alt.Harfest in Manchester on 23rd September, and hosting and performing at the Notting Hill Music Networking event at Tileyard Studios in London on 28th September.