Laura Kriefman is the founder of Hellion Trace (formerly Guerilla Dance Project). She is a leading practitioner specialising in fusing movement and technology. 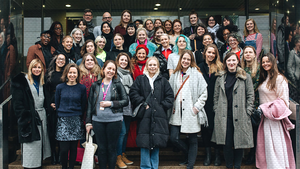 There’s change afoot. Across Europe. Keychange has started something and it’s going to change the music industry from top to bottom. You can’t face this level of female talent and tell me that the future isn’t gender parity.