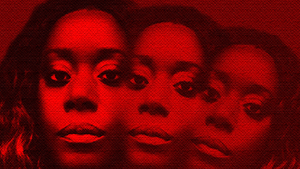 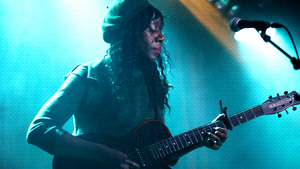 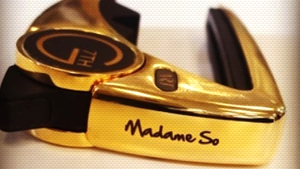 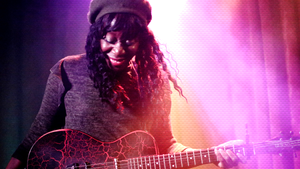 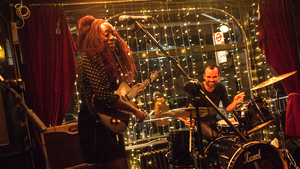 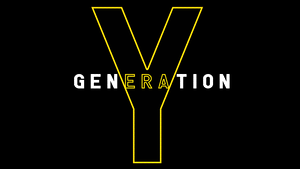 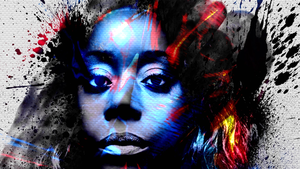 Madame So makes powerful and provocative guitar music with lyrics that pack a punch.
New single Generation Y brilliantly captures the feel of our times, and she has been compared to Hole, Blondie, Patti Smith and PJ Harvey. Madame So was born in Paris and is now based in London - we talked to her about how she creates her music.

Madame So’s new single Generation Y is a dark and intense reflection on how millennials’ youth culture gets judged, and is another compelling offering from the singer songwriter, whose memorable songs include Black Is Beautiful, which features on the Loud Women compilation album.

Generation Y is such a powerful song, what inspired it?

Thanks. I was inspired by how much millennials have been criticised for their shallow outlook on life in a world full of technology, social media and gossip magazines. I took a darker approach of it from my days on the Camden scene and focused on the casual sex, partying and drug use I’d been exposed to at the time.

That was also a little fuck you voicemail to the fact that interactions with people are so shallow and that you can’t pass five minutes without it turning into a networking event in which you “need” to talk about your work occupation before being accepted or rejected for it…. That “what do you do?” question that no one can escape these days when making new acquaintances.

Madame So - by Crawford Blair

I like to write in my room with my guitar. My music is very lyric driven so I often start with lyrics and then put some chords to it.

For Generation Y, I wrote the lyrics right after a bender somewhere in East London I think, and with the lyrics coming out as rather grim, I also had this two-chord riff stuck in my head. There’s no structure per se in that very song but it somehow worked because it was spontaneous.

When it comes to my lyrics, I like to be both straightforward and unclear. I’ve had feedback from some people that Generation Y’s lyrics didn’t make sense to them, but I guess they’d need to dig deeper to gauge what I am talking about when mentioning “the ladies and the gents” for instance … I don’t really like to serve meaning on a tray for the listener, that’d be too easy and even lazy, so I guess I like to write lyrics that would have you have a “double-take” to them. Anyway, it is certainly the case with this song.

“If I pushed your buttons, I’ve accomplished my mission” you’re quoted as saying. What’s your mission?

This is actually a lyric of my debut single ‘Sell-by Date’ which encapsulates what I am trying to do with my music and artistry. Basically, I want to make music that means something to me mostly and if it impacts people whether positively or negatively that is mission accomplished as far as I’m concerned. I’d hate to genuinely be “middle of the road” though I have been accused of that in the past. But I won’t compromise melody just because it is not cool to be melodic or the trend is to “upset the rhythm” and play off key or whatever… . I’ve never been a rebel without a cause and just trying to be too much of this or too much that would be lying to myself.

When it came to recording Generation Y did you record it yourself or use a studio?

Generation Y was recorded in a studio: I took it to my drummer and we jammed some fills which I wanted quite manic to match the story I was telling. And it did work straight away. Then I got my friends Dan Clancy and Catherine Wilson (now Brewer) of the band Paintings of Ships to join me on lead guitar and bass respectively.

My long-term engineer is Matt Hill, also drummer for that very same band, and I work closely with him on the production of all my music.

The ticking at the end is memorable, how did you get that sound?

I wanted to include a clock ticking to illustrate sonically the ‘live fast die young’ motto, so we sourced a sample of a ticking clock that I liked and layered it beneath all the instruments throughout the track, it is only so clearly audible at the end because the rest of the instruments have stopped, but after several listens, you should be able to identify it throughout most of the track.

What sound are you aiming for overall with your music?

I am not the type of musician to “aim for a sound”. I just want to write songs and good ones at that. I don’t sit down and go “ok this time I will go for this sound on that song” etc… I am aware my music has been identified with having 90s and punk undertones, but I never sit down and go with a sonic strategy. But then again maybe I should.

This said for this new series of tracks I will be putting out this year, I wanted to incorporate some sonic quirks like the ticking on Generation Y and other bits and bobs I’ll broadcast in future.

You’ve spoken before about people being surprised that you make guitar-based music. Can you tell us more about that, and what you think is behind it?

Yes, look, it’s pretty clear people are still not used to seeing Black women play the guitar, so much so that it is an event when they do or that some bands feel the need to brandish the fact they are black as a USP, all this because it is a genre that is still greatly white-dominated territory for whatever reason.

In the current state of affairs, maybe I should launch a “Black rockers matter”campaign. No, but seriously, yes I have been pointed at for making the type of music I make because it does not fit with the mainstream’s (both black and white) stereotypical conception of how a female rock musician should look like or present.

It is so anchored in people’s consciousness that rock= white that once I was playing a gig alongside other female-fronted bands, and at soundcheck one of them candidly came to me to tell me they didn’t expect that type of sound and voice from me, that they were expecting something softer as in “blacker” as in “soppy soul-lyesque”, bless.

People just can’t help going back to what they know, so there’s a long way to go until it becomes standard and no one has to justify their musical tastes based on their ethnicity, but I don’t make it a mission of mine - I said my piece with Black is Beautiful, and won’t lower myself to justifying who I am song after song. I am a Black woman , who likes the sound of loud guitars yes but ultimately I just want to play music I like, and actually in future it might not be just guitar driven (hint).

With the guitar being such a focus, we’d love to know more about your guitar

I mainly use two guitars: an acoustic Crafter mainly for writing and stripped down gigs, and a Danelectro that I love because it is light, and I like its neck, the sound is great.

I got it on Denmark Street, entering the shop a bit like you enter a clothing store. I was with a friend, tried a couple of guitars, mainly Fenders but I found them too heavy for me, then I saw my Danelectro and ran to it like you would to a killer garment, asked my friend what she thought of it. She replied: “I don’t know whether to say it’s gorgeous or horrendous”, and I was sold!

What is your other go to music gear?

Most of my songs are capoed mainly for vocal range purposes, so I use a Performance 3 Capo courtesy of G7th Capo. For vocals, I use a standard Shure SM58. My sound is pretty much clean and I occasionally venture with a distortion pedal on a couple of songs like If Only You Were Dead for instance.

When and how did you first start playing music?

I have been writing songs since my late teens but was intimidated to share them at first. The closest I thought I could get, to get exposed to as much music as possible, was by reviewing gigs and interviewing musicians. Then I started hanging out with musicians on the Camden scene, and it gave me confidence that I too could stroll on stage and strum my guitar, so I started performing around 2012, releasing The Sell-by Date EP in 2013.

What are you planning next?

I will be putting a series of tracks throughout the year, accompanied with some cool lyric videos, and hopefully be able to perform this new material live with my band in the not too distant future.

Danelectro 56 Single Cutaway Guitar, Red and Black Crackle I like its neck, the sound is great Read More